Notice: Function add_theme_support( 'html5' ) was called incorrectly. You need to pass an array of types. Please see Debugging in WordPress for more information. (This message was added in version 3.6.1.) in /var/www/wp-includes/functions.php on line 5831
 Portage Canal Dredging | IAI

“Use the correct tool for the job,” is a common construction safety rule, reminding us that the right equipment, used properly, will produce the safest, most efficient result. Not only is it important to use the right type of equipment, but also the right size.

The Portage Canal Segment 1 Dredging Project is a prime example of this principle. The canal, from Dewitt to Adams Streets, in Portage, WI, required dredging to remove metals-contaminated sediment. The placement of material in the canal and type of contamination was well suited to hydraulic dredging and geotextile tube dewatering, and water treatment; however the canal is very narrow, and at the time of this project, was flanked on two sides by unrelated building construction.  The total volume of material to be removed was relatively small, only about 600 cubic yards. The dredging contractor would need to provide a system, scaled to work within the confinements of the canal, as well as the access and support areas; in other words, to use the correct tools for the job.

IAI was tasked with hydraulic dredging to remove the contaminated sediment from the canal, conditioning the dredged material, dewatering the material in geotextile tubes, treating the water released from the tubes and placing a sand cap in the canal at the conclusion of dredging operations.

Another custom solution developed by IAI’s crew involved raking the canal for large debris. Debris was raked from the canal bottom using a skeleton bucket, mounted on an excavator, staged on a floating barge.

IAI’s operators performed regular checks of the floc formation in the dredge slurry, and combined with their observation of the performance of the geotextile tubes, and regular communication with dredge, the operators were able to tweak the applied polymer dose, as needed to achieve proper conditioning of the dredge slurry.

In the dewatering pads, large circumference geotextile tubes were utilized to dewater and contain the dredged material until disposal. The dredge slurry-polymer mixture was directed into the geotextile tubes via a network of HDPE main header pipe, hoses to the fill ports of the tubes, and flow control valves.

A total of three (3) geotextile tubes were filled over the course of the project, to dewater 900 cubic yards of material. Tubes were filled at a rate of approximately 3 – 5 days per tube. Each tube was 60-ft. in circumference and 100-ft. long. The geotextile tubes were allowed to passively dewater for eight (8) days after the conclusion of dredging, and then were dry enough to be removed from the site without the addition of amendment. Preliminary testing had indicated a minimum of (12) days of dewatering would be required to achieve in-situ percent solids.

IAI operators use a protocol of observation and data tracking to evaluate the performance of each geotextile tube as it is filled. Operators note the flocculation, thickness and composition of the material flowing into the tube, the volume and appearance of water shedding off the exterior of the tube, and the rate at which the tube height is increasing. When a geotextile tube reaches the maximum fill height designated by the manufacturer, flow to that tube is stopped and the tube is allowed to passively dewater for a period of time. The length of time required for passive dewatering depends mostly on the volume of consolidated material already inside the tube. This protocol has been developed over many years of utilizing geotextile tubes to dewater contaminated sediment.

Geotextile tube filtrate and storm water collected in the dewatering pad sump were treated in a temporary water treatment plant, designed, installed and operated by IAI. The plant was oversized, with capacity to handle up to 1,200 gallons per minute of incoming flow, and utilized bag filters to remove solids. Over the course of the dredging project, nearly 3.7 million gallons of water were treated and discharged to the sanitary sewer, at a maximum permitted rate of 400 gpm.

Discharge from the treatment system was regulated by an Industrial Pretreatment Permit issued by the local municipality. IAI provided a skilled operations staff to ensure optimal treatment plant operations.

At the completion of dredging operations, IAI mobilized its alternative bid, sand slurry dispersion capping system to the site. It was another example of the use of small, custom-built equipment on the project, specifically tailored to the requirements of the site. A minimum 6-in. sand cap was placed throughout Segment 1 of the canal, to isolate and prevent any remaining trace mercury contamination from being transported out of the canal.

The primary contaminants of concern addressed by this project were mercury (Hg) and lead (Pb), with mercury being the primary risk driver. Elevated levels of other contaminants such as polycyclic aromatic hydrocarbons (PAHs), petroleum substances, and polychlorinated biphenyls (PCBs) were also detected in the canal prior to remediation.

Post-dredge and post-capping analysis showed the remedial action removed 70% of the mass and volume of mercury or approximately 8-lbs. of mercury (Hg). The remedial action also reduced the volume and mass of co‐occurring contaminants, such as lead (Pb). The surface weighted average concentration (SWAC) showed a 70% reduction in mercury concentration, post-dredge. After sand placement, the final SWAC of 0.02 mg/kg total mercury is far below the remedial goal of 0.36 mg/kg total mercury. The Wisconsin Department of Natural Resources (WDNR) Final Remediation Construction Documentation Report concluded “… the completed final remedial action exceeds all design criteria and the plans and specifications… The remedial action reduced the volume, mass, toxicity, and mobility of the contaminated sediments in the Canal.” 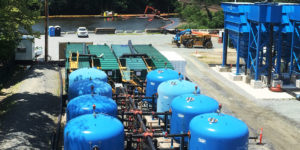 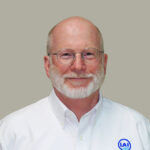 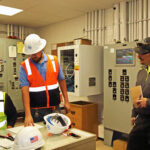